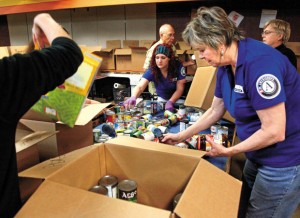 Walk & Knock organizers got an early Christmas present when they tallied the results of their annual food drive Saturday.

“It’s a very uplifting experience to see the community pull together like this,” organizer Tom Gunn of Early Edition Rotary wrote in a statement.

Organizers noted that Saturday’s donations were still well behind 2010 and 2011, when donations topped 70,000 pounds, and they said they plan to meet earlier in the year in 2014 to figure out how to better jump-start donations.

Walk & Knock is the area’s biggest food drive. All the food is distributed through the Lower Columbia CAP food warehouse, which has been the center of the operation since 1982.

Hundreds of volunteers canvassed neighborhoods Saturday, knocking on doors and picking up bags of food to bring to the warehouse. Once inside, dozens more divided the food up into boxes to be distributed to those in need.

“I love it. It’s really enjoyable getting to spend time with everybody and help the community,” volunteer Sadie Parsons, 25, of Kelso, said while boxing the food.

Regardless of the total amount, volunteers and organizers said they know they are making a difference during the holiday season.

“Bottom line: With every bag of food, someone eats who otherwise may not have,” Help warehouse coordinator Rick Philbrook said in a statement.